Super Tuesday is next week for Texas and there is one main issue that narrows the Presidential field for me…..

Who gets my vote for President of the United States doesn’t concern party, personality or prettiness. 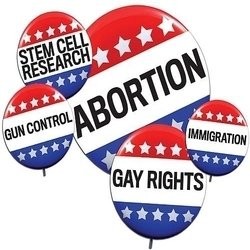 Full disclosure: I’m a born again, Bible-believing, evangelical Christian who believes that Jesus Christ saves sinners from eternal Hell when they put their faith and trust in him and repent of their sins. I’m also a pastor. As such, I do hope that the leader of the free world would believe in God, and would be a Christian, (the only way to know God, by the way), but I understand that the U.S.A. is not a theocracy.

Now, through a process of elimination, I’m able to narrow the Presidential field, keeping in mind that my all-important issue must be addressed satisfactorily. (I haven’t mentioned it yet.)

First, I eliminate an entire party. Why?

In the 2012 Democrat Convention, God was removed from their platform as well as recognition that Jerusalem is the capital city of Israel. A vote was then quickly taken to restore God and Jerusalem as Israel’s capital back to the Democrat platform, but was denied three times by loud choruses of “NO!” until it was ramrodded back in by a fuzzy vote while many delegates booed.

A party that boos God? And denies him three times? At least they’re biblical.

“For the time will come,” the Bible says, “when people will not put up with sound doctrine. Instead, to suit their own desires, they will gather around them a great number of teachers to say what their itching ears want to hear.” (2 Timothy 4:3)

#1: A loud, blustery, non-politician who misquotes the Bible and says “Planned Parenthood does a good job.”

#2: A political outsider who is Pro-life.

#3: An establishment candidate who is Pro-life.

Have you guessed my issue? Any candidate who refuses to support the least of these, the future of America, the ones who yet have no voice but are very precious in the sight of God, will never have my vote no matter how

No person is truly secure if the innocent are not protected, 57 million of whom have already perished at the hands of godless politicians on both sides of the aisle.

I’ve yet to sit out any Presidential election, but if Americans are safe within her borders and with our investments but not in the womb, then my 2016 vote will be exchanged for a prayer: “On the platform of Jesus, here I stand; I can do no other. God help me.”

The Trump Tapes: A new video reveals Donald J. Trump’s take on every major issue affecting our country, in his own words.