YES, I ACTUALLY WENT TO A BETO O’ ROURKE RALLY! If you aren’t a Texan, then you need to know that Beto (pronounced Beato in the Hill Country), is Conservative Ted Cruz’s liberal arch-rival. But, wait! Before you pick up stones, let me explain. My daughter wanted to go. Since we had not seen each other for a while and she was down from college with a freshly pierced proboscis, nose ring and new-fangled University politics, I accompanied her.

It was a sacrificial act of love.

She wanted some assurances that I wouldn’t argue, roll my eyes or preach.

I had a far more inventive plan to try out….Heh, heh, heh…. 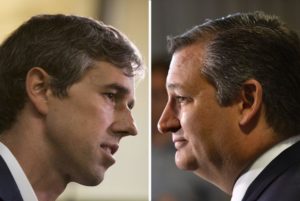 In case you didn’t notice there’s a war going on in the America.  Not the conflict between Liberals and Conservatives nor the one between Republicans and Democrats, not the tension between the races, or even the ruckus concerning those who are pro-Judge Kavanaugh and those against. Those are just skirmishes on the battlefield. No, real combat has been going on since the beginning of time, since Adam looked the other way while Eve ate the forbidden fruit.

It’s the clash between good and evil, Satan and God, between those who love the Lord and those who hate him.

With ever-increasing fervor God is being removed from the public square. In 1962, prayer was banned in public schools, then Bible teachings in 1963. The 10 Commandments were the next to go in 1980.

Atheists are suing to remove the words “In God We Trust” from our currency.

There’s the ever-increasing anti-Christian sentiment permeating the Internet, from Google to Facebook.

Mike Pompeo, nominated to become Secretary of State, was almost disqualified because of his outspoken Christian beliefs. Senator Bernie Sanders accused the nominee for deputy director of the White House Office of Management and Budget, Russell Vought, of being Islamophobic, since he believes there is only one way to God through faith in Christ.

The American church has been quiet, lapsing into an apathetic stupor, allowing the faithless and the anti-religious to make decisions in the land. I’m not talking about the Christian Evangelical Political Machine—no, they’re quite loud—I’m speaking of God’s remnant, his universal, invisible church, all those who are born again in Jesus Christ, the people entrusted to further God’s cause, those who have been called out and are living Christ’s life in them as they get the Gospel to all.

Christians are soldiers in a spiritual battle against the kingdom of darkness. We fight for the truth of the Bible, for our Lord Jesus Christ’s glory, the salvation of the unsaved, and for the integrity of fellow believers. “For our struggle is not against flesh and blood, but against the rulers, against the authorities, against the powers of this dark world and against the spiritual forces of evil in the heavenly realms. (Ephesians 6:12)

Who will take a stand for righteousness’ sake when our God, our Savior, is misrepresented, slandered and maligned?

I’m not talking about fighting physically against those who oppose God either. “For though we live in the world, we do not wage war as the world does. The weapons we fight with are not the weapons of the world. On the contrary, they have divine power to demolish strongholds. We demolish arguments and every pretension that sets itself up against the knowledge of God, and we take captive every thought to make it obedient to Christ.” (2 Corinthians 10) 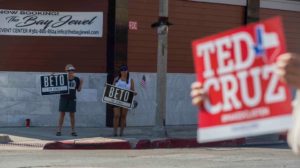 At the Beto Rally, I took special Gospel tracts that had former President Obama on the front and the full Gospel on the back. It told about each person’s responsibility to trust in the Savior, then repent of their sin or pay for it in Hell. Each tract spoke of God’s unconditional love as demonstrated by the death of his Son on a cross, his burial and resurrection three days later. Hundreds of politicos grabbed those informational pieces of paper, reading them, asking questions, a few protesting. I was a missionary in a foreign land because this particular political party removed “God” from their platform in 2012. I was there because I wanted to give them a fighting chance for Heaven.

And because I loved them.

The Christian battle is for the truth, to change how people think, to rescue them from a damning ideology. We are to attack and destroy the strongholds of false religions, opinions, beliefs and philosophies. Those are the marching orders of soldiers in the Lord’s Army.

Are you ready to enlist?