A WOMAN ASKED ME IF I, AS A PASTOR, GOT INVOLVED IN POLITICS because the pastor at her church refused to talk about political issues and discouraged congregants from doing the same. I assured her that I thought it was a Christian’s mandate to involve themselves in the issues of the day, one in particular, and any politician I support must be against it because I’m a one issue guy. Yes, there are many important matters, but all pale in comparison to the one that kills millions of innocent babies indiscriminately.

Let’s look at the issues:

A “living wage” means nothing when one can always afford to kill the living.

A more open border policy when humans can’t pass beyond the border of the womb is the worst kind of inhumanity.

Healthcare for all means nothing at all when the weakest and most vulnerable of all get none at all, not even the right to live at all. 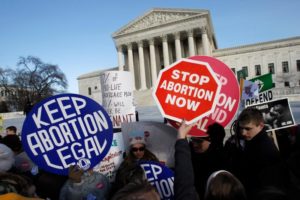 Stricter firearm laws will never save pre-born not killed by a gun.

Emphasis on gender politics, intersectionality and policies against racism are nothing if not hypocritical when females and blacks are killed more frequently in the womb than any other innocent person.

Equality for all should include all people no matter how small.

Everyone should have a right to vote. Someday.

Perhaps marijuana should be legalized so that we may forget the tragedy of policies that ignore the least of these.