Sunday, August 30, marked the official 7-year anniversary of my being the pastor at Community Church of the Hills. When I first started, we had 81 people. Out of that original congregation, 12 still attend. 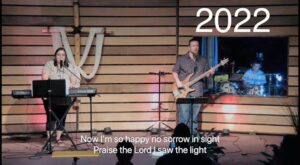 The first year was my honeymoon. It seemed everyone loved me. The second and third year, not so much. I learned that in a small church, in a small town, if you offend one person, the whole family and all their friends leave.I offended many during my first years’ learning curve.

Coming directly from a 1,500-member church in the beach cities of L.A. to a small country church in the middle of rural Texas didn’t translate well. I was not very gracious and was way too demanding. I over-emphasized evangelism and talked about Hell ad nauseum.

Another said that he wasn’t being fed. (Pastors, ever hear that one before?)

Still another complained that she “just wasn’t feeling it.”

Yet another left because someone put a hat on his wife’s chair.

One guy split because he didn’t like being told what to do and another bailed because I shook his hand the wrong way.

Oh! Did I mention that God prevented a church split in 2018? Or that a guy wrote a 4 page letter to the Elders trying to get me fired?

The bottom line? They didn’t love me as much as I thought.

I brought in city methods and a city attitude to a country church. I thought I knew it all and was going to show everyone a thing or two. A man I greatly respected said, “Well, Pastor, you drove out another one.”

I couldn’t argue. I was a bull rider in a China shop.

An executive friend of mine who consults for large companies said that when a new CEO comes in, 80% of the employees leave.

I was right on track.

I had to get a second job as a school bus driver and thought that God may be calling me out of ministry. Still, I was determined not to quit. If our church got whittled down to just a few and I had to take a third job, quitting wasn’t an option. God was perfectly able to remove me from the pastorate any time he wanted without my help. I stayed and prayed and cried and trusted.

Then things started to turn around when the pandemic hit. We stayed open having only a handful of exclusively online-services. Church was held in the parking lot: I stood in the back of an F-150 and preached while the congregation listened on their FM radios. Five weeks later we gathered back together nearly doubling in size, offerings too. We even hired a Minister of Women and could now afford to fix our air conditioning. Go figure.

People came enthusiastic to hear the Word taught. Spontaneous fellowship started happening. The “meet and greet” time during service kept getting longer and longer. We had potlucks every week and “all-church” potlucks every other month. There was so much food, I felt like I was Baptist.

I am richly blessed and so grateful for God who caused me to persevere. What did I do to grow the church?

And God did what he promised to do: “I will build my church, and the gates of hell shall not prevail against it.”

(Now read what happened on the day that marked my 7th year.)

Read how I got called to relocate to Texas here.