I began my jail ministry three years ago, September 25, 2019, while visiting “Manny,” a man I had never met before. At the request of his brother who lived 5 hours away, he asked me to visit him after finding our church online. 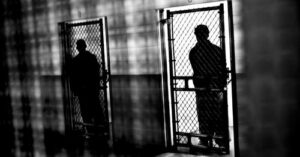 I began my jail ministry on this day three years ago, while visiting “Manny,” a man I had never met before. At the request of his brother who lived 5 hours away, he asked me to visit him after finding our church online.

Manny said that he had been a Christian for over forty years.

He said that the main reason he was in jail was because he stopped going to church. One thing led to another, with sin finally getting the best of him. God got his attention after he fell too far away by putting him behind bars for what looked to be a long, long time. While incarcerated, he witnessed to everyone who came into his cell, and, with the help of his brother, gave each person a Bible, handing out over 67 Life Application Bibles.

I visited him weekly.

The second time I was there, he asked if I could visit another cellmate. Then a third and a fourth. We talked about the Bible, the Lord Jesus, and I encouraged them all with Scripture, praying for everyone.

One of the inmates, “Rick,” got out several months later and came to our church. The congregation loved and accepted him just as he was. He even started serving in simple ways. A member let him stay in an extra room he had.

Then Covid hit in March 2020, ending my visits to the jail. Still, I called Manny on occasion to check in. Rick continued to go to our church until a political disagreement caused him to leave. He didn’t like our stance on the subject. When I would see Rick stumbling down Highway 281, brown bag in hand, I urged him to come back to church. He didn’t.

Manny toughed it out and was eventually released on bail. He found a place to live, a job, endured tough times, yet stayed faithful. His crime didn’t allow him to come to church, so I met personally with him. He experienced court dates, setbacks, depression. Still, Manny hung in there, reading his Bible, trusting Jesus.

A year later Rick was found dead in a motel room.

Manny, nearly three years later, was free with conditions. After local probation ended, he was able to move out of the area where he now lives in his own apartment, working a new job as a sales manager, enjoying a brand new life. Why? Because he didn’t bail on God.

“For he has rescued us from the dominion of darkness and brought us into the kingdom of the Son he loves, in whom we have redemption, the forgiveness of sins.” (Colossians 1:13-14)

Rick is dead. Manny is alive.