Once upon a time, there was a wise man who used to go to the ocean to do his writing. He had a habit of walking on the beach before he began his work.

One day, as he was walking along the shore, he looked down the beach and saw a human figure moving like a dancer. He smiled to himself at the thought of someone who would dance to the day, and so, he walked faster to catch up.

As he got closer, he noticed that the figure was that of a young man, and that what he was doing was not dancing at all. The young man was reaching down to the shore, picking up small objects, and throwing them into the ocean.

He came closer still and called out “Good morning! May I ask what it is that you are doing?”

The young man paused, looked up, and replied, “Throwing starfish into the ocean.”

“I must ask, then, why are you throwing starfish into the ocean?”

The young man replied, “The sun is up, and the tide is going out. If I don’t throw them in, they’ll die.”

Upon hearing this, the wise man commented, “But, young man, do you not realize that there are miles and miles of beach and there are starfish all along every mile? You can’t possibly make a difference!”

At this, the young man bent down, picked up yet another starfish, and threw it into the ocean. As it met the water, he said, “It made a difference for that one.”

On Saturday, a small team and myself manned an evangelism booth at the Texas State Fair sponsored by The Full Gospel Businessmen’s Association. Thousands upon thousands of people flooded the walkway in front of our booth, some stopping in, most passing by. 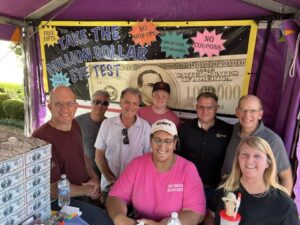 A sad testimony was from a young man busted for seven felonies because he was arrested for transporting seven cakes of THC. He said his life was over because he was facing life…just like every one of his family had previously, generation after generation. His hard life began at age three, when he had every bone in his body broken by abusive parents.

One of my fellow Christians called me over to help give him the good news of Jesus, but I asked him to tell his own story.

He did, explaining that he was out on parole and had been in and out of prison for years. Before that, he never lived anywhere else except other people’s couches. But he found Christ, turned his life around, and now goes into many different hardcore penitentiaries, preaching the Gospel. Every time he asked his parole officer for permission to do so, the official would shake his head and say that there was no way. Then he’d come back a while later and ask for a letter of recommendation because the warden would approve his entry. Time and again, he was allowed in, completely befuddling his parole supervisor.

Now married, in May 2023, he will be totally free. As he told his testimony, all the glory was given to Christ, his Savior.

After listening to this incredible account of God’s faithfulness, I asked the young man if he would like to make the choice to live a different life by repenting and trusting Christ. He declined. When I asked if I could pray for him, he said no once again, turned around and left.

*Introduction adapted from “The Star Thrower” by Loren Eiseley