It was bound to happen: the showdown.

It had been brewing for some time because the manager never liked me.

Here’s a re-cap of what led to my getting the boot today:

On Wednesdays for over a year now, I head down to the Hill Country Senior Citizens Activity Center and mix it up with the old timers. These septo-, octo- and nonagenarians are firmly entrenched in their various denominations, but it doesn’t mean they are saved…and there isn’t much time left for many of them. I get to learn about their lives, their personal histories and the history of Dripping Springs itself, the place where I’m planting a church. One man said he’s a third generation Drippin’ man. “My family’s been here since 1880!” 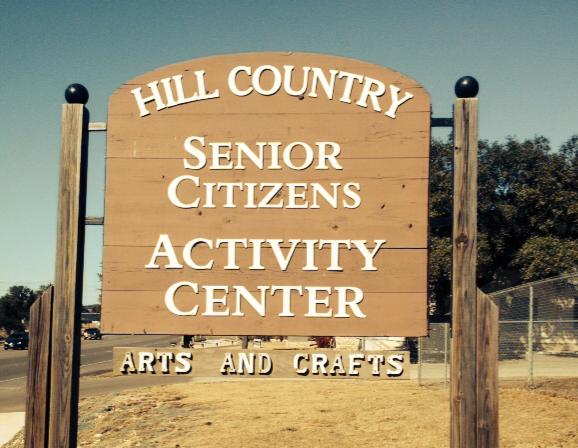 When I first visited I was introduced as the new pastor in town by the Center’s manager, but she forgot to mention our church. I noticed that all these old folks had to buss their own lunch dishes, so I started clearing their tables for them. At that point they started asking, “So, where is your church?”

There is a method to my madness: By meeting with the seniors, I hope after weeks and months to earn their trust. Perhaps they may even attend Hope Chapel Hill Country someday or recommend us to a friend or grand kid.

But one week I was called aside by the Center’s 76-year-old manager and warned that I couldn’t preach the Gospel there. She took me aside and told me that three people complained about my “preaching.”

“You see,” she explained, “even in a private conversation someone might overhear you and get offended.” She further explained that the Center gets government money and my preaching may put that in jeopardy.

I actually wasn’t preaching; just conversing about what I teach at our church, and then inviting them to come visit. 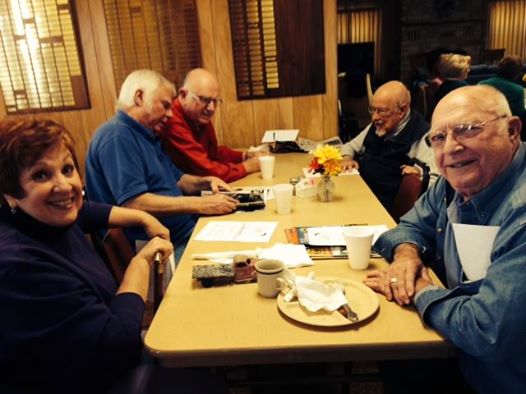 The next Wednesday a lady whispered to me, “I’m surprised that you are back here after what you were told last week. I overheard your conversation with the manager,” as we scraped the after-lunch dishes together.

“So, you are on my side?” I asked, conspiratorially.

“Why do you think she said that to me?”

She looked around and spoke in a whisper. “I can’t really talk about it, but, let’s just say that some people are nicer than others.” 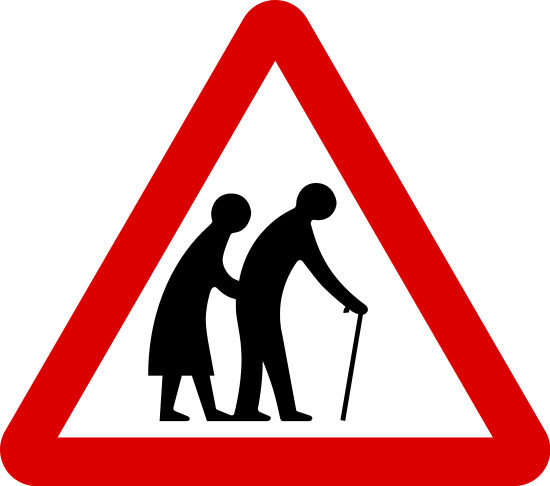 In the ensuing weeks, I was called into the manager’s office and forbidden to pray and help people, too. “But I’m a pastor,” I protested, “that’s what I do!”

The manager replied, “Well, you can continue to do that, just don’t do it here!”

The next week, I brought her 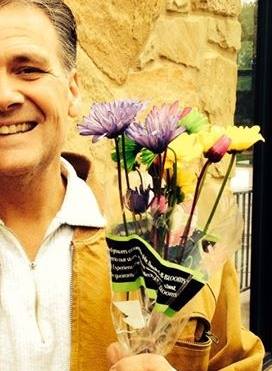 flowers. I hid them behind my back and presented them. “Let’s start all over now that I know the rules,” I cheerfully said. She thanked me politely and stored them in her office.

I sat down to eat with the other seniors like I did every week, but this time there was a visitor. He was a forty-year-old man who had been saved for six months and was on fire. What could I do? I had to encourage him in the Lord. We talked and shared Scripture while keeping a wary eye on the manager. I told the young believer that I’d like to pray for him.

I bussed the tables and after nearly everyone left, I approached the manager. “How’d I do?”

Every week, before lunch begins, someone is invited up front to give the blessing. This time, it was Pastor Cody.

I had heard good things about him. He’s a lay pastor at the local Methodist church where the manager attends. He was the “resident minister” at the Senior Center before I came. In fact, I arrived at the Center the very week he stopped going.

Thankfully, he was a true man of God. 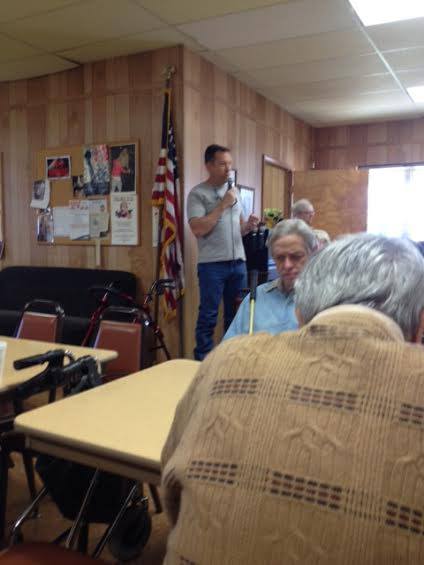 Here’s the rub: Before he prayed, he spoke in the microphone about the necessity of belonging to Jesus Christ and urged people to live for him. He preached out of John chapter 4, explaining that Jesus had Living Water for all, then prayed a God-glorifying prayer. In short, it was an out-and-out evangelical message, the type of message I was warned not to talk about.

I spoke with Cody briefly afterward, and it turns out before he went to the Methodist church, he went to a fellowship that met…at the same location where Hope Chapel Hill Country meets!!!

But why am I forbidden to speak in the name of Jesus privately while he’s able to publicly proclaim him loudly?

I don’t know, but as long as Christ was preached, I was happy.

After lunch, a little old lady asked if I could help her move a TV set for a legally blind man. I said yes. I’m there to help. Then, I prayed for a young woman who had an early onset of Alzheimer’s.

At the gym, another elderly lady recognized me and offered this encouragement: “It’s not what you say, it’s what you are doing.” She assured me that she knew what was going on.

Six visitors have visited our church since I’ve been going there. Two attend regularly. One man has become a good friend. Progress….

I offered to pray for one of these attenders at the Senior Center but she stopped me from doing so. “We better go outside.”

“I’ve been reading your blog.”

“How did you know about my blog?”

“It was on the back of the bulletin you gave us last Sunday; seems like you cause trouble everywhere you go,” she said with a smile. “Jesus caused trouble, too.”

Before I prayed for her, another woman stopped me to say how God healed her of a cancerous tumor after I prayed for her several weeks before. “They were going to cut me open, but when the doctor checked me, he said everything was gone. I want to give God all the glory after you prayed for me.” 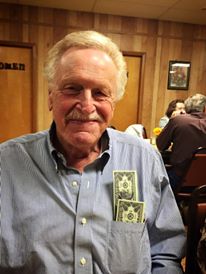 It’s now been over seven months since I’ve written about the Senior Center because all has been calm. I have employed a strategy where I keep Gospel tracts in my vest pocket and when people see them, I invite them to take one.

Even better, my friend Garth keeps them in his pocket and is more than happy to hand them out. Boo-Yah!

Then, today, a skirmish turned into an all-out war.

I usually like to keep a Bible with my Gospel tracts on top of the lunch table while we eat. But this day, manager noticed them, pulled me aside and said that I couldn’t have them displayed like that. “Why not? You told me I can’t hand them out and I haven’t,” I graciously replied. “I don’t have to put them away, you know. Yet, for you, I will.” I smiled at her. 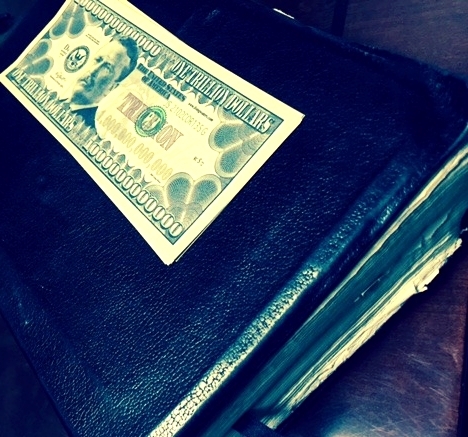 But it burned my bucket.

I was resolved to ask her why she was so against me, my tracts, and even the Gospel, before I left.

Lunch ended. I waited for the people to clear out, then headed for her office. “Why don’t you like these Gospel tracts? There are people in here that are headed for Hell, many don’t have much time left, and they need to hear the Good News.”

“Everyone in here is a Christian,” the manager replied.

“Jesus said that the road is very narrow and few find it,” I countered.

“I hate those things. They do no good. They are phony and people get irritated at you for handing them out.”

“People always get irritated at me. And Billy Graham himself said that nothing sows the seed of the Gospel like a good tract.”

“Still, I don’t want you handing them out. Since I met you I knew there was just something wrong about you. You are the only pastor who has ever handed those things out.”

“That’s why I do it!” I then made a transition to her spiritual condition: “Where are you going when you die?”

“Because you are you? Are you a good person?”

“Nobody can be good enough. You need Jesus.”

I did not think that she really believed that, what with her comment that everyone is going to Heaven and her constant suppression of my attempts to talk to people about the Savior.

That done it, y’all.

I scurried out of her office.

BAM! The door slammed shut behind me.

The cafeteria workers were silent as they shot me a knowing look. The few stragglers in the lunch room remained quiet and averted their eyes.

I sheepishly walked out vowing to myself to return the next week.

(I returned three weeks later to this unexpected reception. Read it by clicking here.)