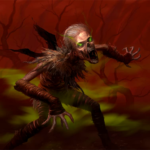 I GOT MY 2ND MODERNA SHOT two months ago and my face hasn’t melted, I haven’t died in my sleep and the start of the zombie apocalypse has been postponed.

I didn’t get vaxxed because I was scared, believed Biden, Fauci or the rest of the mainstream news media.

It wasn’t because I believed it was the greatest health threat of our time.

It wasn’t even because my daughters pressured me to do so. I had a much more important reason for getting “the mark of the beast.”

I always looked askance at the whole contrived media distortion of the virus itself and felt the odds of me dying from it were akin to getting hit by lightning while being eaten by a shark.

I always thought masks were stupid, didn’t work, and felt the whole controversy was a big lie to get the Bad Orange Man out of office.

So why did I get the vaccine since it ain’t really a vaccine anyway? After all, my face might melt, my gonads could explode, and my progeny will end up playing dueling banjoes somewhere in the northwest Georgia wilderness.

Facebook “friends” warned that I would suffer blood clots, heart attack or depletion of my platelets. I’d most likely contract some strange immunological disorder, or have a stroke and die.

All because someone’s loved one somewhere had that happen to them.

About those “Facebook friends” of mine? I received so much negativity from my professing “Christian Conservative” friends who accused me of being a follower, not a leader, a Molech worshiper, and similar in character to the Holocaust masterminds.

I was told that I’m what’s wrong with the church today and that I was a supporter of baby murderers and that “we should pray for his congregation.”

But my favorite Christian encouragement was this: “Your sermon prep should be stepping down from your role as pastor due to being unqualified for supporting child sacrifice through your actions. Not only that, but bowing down to the federal beast rather than God.”

You’re probably wondering, “Then why did he get vaccinated?”

I wasn’t going to, but Ben Shapiro supported it, Ted Cruz, too. World News Group, a Christian worldview media enterprise I greatly respect, also consistently supported it. But those weren’t the reasons I got the shots.

I was convinced after a lunch meeting with a godly mentoring pastor, a former Navy jet pilot with a computer degree from the University of Austin. He supported my ministry in the Hill Country when everything went wrong, prayerfully and financially.

Yeah. He got cred.

When I told him I didn’t plan on getting the shots, he replied: “You have a significant older congregation. Get it for them. You don’t want to be accused of giving them the virus. God forbid, if someone should die and you are blamed.”

I was struck to the heart. He was right. Since not all of our older members were vaxxed, I didn’t want to put them in danger, regardless of how small the risk.

As for the abortion aspect? Moderna did perform confirmation tests (to ensure the vaccines work) using fetal cell lines descending from cells taken from elective abortions in the 1970s and 1980s, according to infectious diseases expert James Lawler, MD. Current fetal cell lines are thousands of generations removed from the original fetal tissue.

I chose to go ahead with the procedure anyway out of love, respect and caution for my living congregation, no matter how small the risk to them.

But my greatest sacrifice was choosing to deny myself the pleasure of being self-righteous for the greater good.

That was really hard because that is true Facebook Christianity these days.