“WHEN I SEE GOD, I WILL TELL HIM THAT HE’S A NUT JOB!” said Rich the Atheist during a conversation I had with him on a college campus. 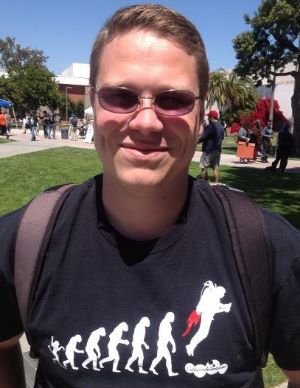 Why would Rich utter such blasphemous words? Because he got so frustrated with the way I argued my points using what’s called “presuppositional apologetics.” Don’t be intimidated by that phrase, it simply means that I defend the Christian faith (apologetics) by presupposing that God exists and that the Bible is valid and true having the ability to change lives.

When talking with skeptics, Christians do not need to know about every scientific theory or secular doctrine that comes down the pike; they do not have to be well-versed in Quantum Physics, evolutionary biology or abiogenesis hypotheses. That’s the unbeliever’s game. All a believer needs to know is the Word of God.

David Wright from “Answers in Genesis” clarifies further: “When explaining their beliefs, Christians often feel they must first prove the Bible or prove the existence of God. This approach reveals that they do not yet understand the Bible’s approach, known as presuppositional apologetics.

“For instance, my presupposition is that God exists and He has given us His Word, (the Bible), that is absolute truth. So, I use the Bible as the basis for how to think, interpret evidence, explain the world around me, and read the Bible. An atheist’s presupposition will most likely be that there is no God and that truth is relative. An atheist believes that man decides truth, and so he thinks, interprets evidence, and views the world and Bible accordingly.”

Said another way, atheists presuppose there is no God. The Bible presupposes that they do.  Romans 1:21 says, “For although they knew God, they did not honor him as God or give thanks to him, but they became futile in their thinking, and their foolish hearts were darkened.” The Bible clearly states that everyone knows God. The reason they deny that fact is because “by their unrighteousness [they] suppress the truth (Romans 1:18). In other words, an unbeliever does not want to know God because they sin, knowing that if they acknowledge Him, they will have to acknowledge their sin as well. If they acknowledge their sin, they will have to do something about it, so they suppress the truth.

All this to say: use the Word of God when dealing with a skeptic, an agnostic or a downright rude individual, like Rich the Atheist. The Word of God is always correct. There is no need to apologize or offer excuses. Stand on the Bible! Also, when you rely on His Word, you get His power as he uses it in the heart of that unbeliever.

The atheist may ask: How do you know that it’s the Word of God?

You simply say, “Because the Bible says that it is. All Scripture is inspired by God and is useful to teach us what is true and to make us realize what is wrong in our lives. It corrects us when we are wrong and teaches us to do what is right. (2 Timothy 3:16)

How did everything get here? “In the beginning, God created the heavens and the earth.” (Genesis 1:1)

That is why Rich got so angry. The presuppositional evangelist stands on the solid rock of Scripture while the unbeliever sinks in the quicksand of his own logic. So simple. It’s almost too simple.