I MET MUHAMMAD ALI LONG AGO in a little restaurant on La Cienega Blvd. in Los Angeles. I walked up to him and said, “Hi Champ!”

He was very slow, muddled, and slurred his speech. Obviously, all the years of fighting in the ring had taken its toll. He weakly stuck out his hand for me to shake. I remember it being very limp. He then shuffled away.

I’m not sure if I was a Christian back then, but, if I was, I do remember this: I did NOT tell him about Jesus Christ. Ali died as an outspoken Muslim.

“There is no denying that Muhammad Ali is the most famous and influential American Muslim, ever,” wrote Muslim-American scholar and cleric Yasir Qadhi, on a Facebook post.

According to CNN, Ali told a reporter in the mid-1990s that he thought constantly about death, especially during his five daily prayers. “Thinking about after,” Ali said. “Thinking about paradise.” 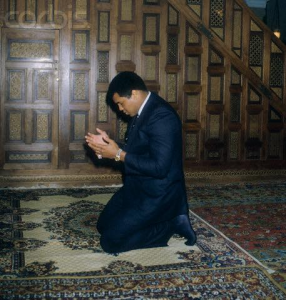 If I could have a “do-over” I would have chatted a little longer with the former Cassius Clay and asked him where he would go when he died, Heaven or Hell.  Like every Muslim I have talked to he would probably have said, “Only Allah knows.”

“Well, what would get you into Heaven, Champ?”

Muslims, like Ali, usually respond by saying that if their good outweighs their bad, they will make it to Paradise.

“So, you have to wait until then? What if it’s too late and your good isn’t good enough?”

One of the biggest differences between Christianity and Islam is that no one can be good enough to make it to Heaven.

I’d explain to the Louisville Lip that one sin committed—one lie, one lustful thought, one blasphemous word—will find him guilty on Judgment Day and he’d end up in Hell. I’d tell him that the Bible says that “there is no one righteous, not even one…there is no one who does good, not even one.”

Then I would tell him about the God who loved him so much that he gave his one and only Son, 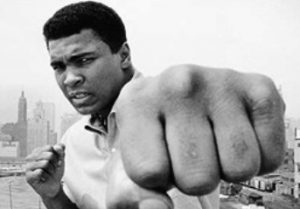 that whosoever believes in Him will not perish—will not go to Hell—but have everlasting life.

I’d plead with him to turn from his false god to the One True God, to Jesus, who said, “I am the way and the truth and the life. No one comes to the Father except through me.”

I’d give him a fighting chance for Heaven by asking, “Would you like to turn from your sins and trust Jesus Christ for the forgiveness of sins today?”

Yes, I would have said all that, but didn’t. I missed an opportunity to share about THE GREATEST with “The Greatest.”