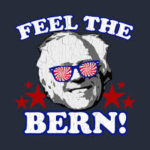 THE INCONVENIENT TRUTH ABOUT CHRISTIANITY is the fact that not everyone goes to Heaven, not every belief system is correct and millions of people stand condemned already.

It also bothered Senator Bernie Sanders when he grilled Russell Vought, President Donald Trump’s nominee for deputy director of the White House Office of Management and Budget last week. Here’s an edited excerpt of the exchange:

Sanders: Let me get to this issue that has bothered me and bothered many other people. You wrote, “Muslims do not simply have a deficient theology. They do not know God because they have rejected Jesus Christ, His Son, and they stand condemned.” Do you believe that that statement is Islamophobic?

Vought: Absolutely not, Senator. I’m a Christian, and I believe in a Christian set of principles based on my faith. That post, as I stated in the questionnaire to this committee, was to defend my alma mater, Wheaton College, a Christian school that has a statement of faith that includes the centrality of Jesus Christ for salvation, and . . .

Sanders: I understand that. I don’t know how many Muslims there are in America. Maybe a couple million. Are you suggesting that all those people stand condemned? What about Jews? Do they stand condemned too?

Sanders: I understand you are a Christian! In your judgment, do you think that people who are not Christians are going to be condemned?

I want to jump in right here and say that it really doesn’t matter what Vought had to say in answer to Sanders’ question, but I am glad that he was straight-forward in explaining his beliefs without denying the facts of what Jesus taught and what the Bible says.

In this day of inclusivity and politically-correct thinking, it’s hard for many Christians to stand for Jesus and explain to others about the very narrow road He spoke about about. Who likes to have people roll their eyes at you, reject you or call you a bigot for what you believe?  Still, truth is truth, inconvenient or not. This is what Jesus actually said: “I am the way and the truth and the life. No one comes to the Father except through me.” (John 14:6)

Does Jesus leave room for any other way to get to God? Think about it. Can you interpret what he said in any other way than what he actually said? You can forget about those “alternative facts,” by the way.

Now, what about that condemnation business? Here’s what Jesus said about that. We all love John 3:16, but how many times have you heard people talk about the next two verses? “For God so loved the world that he gave his one and only Son, that whoever believes in him shall not perish but have eternal life. For God did not send his Son into the world to condemn the world, but to save the world through him. Whoever believes in him is not condemned, but whoever does not believe stands condemned already because they have not believed in the name of God’s one and only Son.”

Was Jesus lying? Was he joking? Was this some strange metaphor, not to be taken literally? No. No. No. Take it at face value. There is only one way. Can you get to Fredericksburg from Johnson City by going east on Hwy 290? No. There’s only one way.

“Condemned already,” Jesus says. That means right now, as if you are on death row waiting for the sentence to be carried out. You are condemned already because of your sin, of which everyone is guilty. You can get off death row if the Governor shows you mercy, makes a call and grants you clemency. God showed his mercy by sending His Son to die on your behalf. 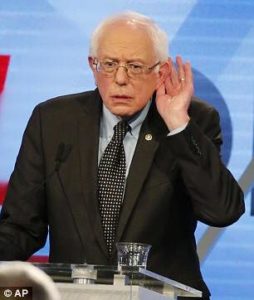 He grants you clemency, forgiveness and eternity in Heaven when you repent of your sin and put your trust in Jesus. If you reject his offer, then here’s another unpleasant, inconvenient truth that Jesus spoke about: “Whoever believes in the Son has eternal life, but whoever rejects the Son will not see life, for God’s wrath remains on them.” (John 3:36)

A spokesman for Senator Sanders said this after the hearing: “In a democratic society, founded on the principle of religious freedom, we can all disagree over issues, but racism and bigotry—condemning an entire group of people because of their faith—cannot be part of any public policy.”

Jesus would have felt the Bern and wouldn’t have been confirmed by Sanders.