“REPENT YOU WICKED PASTOR!” This was just one of many Facebook comments I received when I posted an account of what happened at the Cheesecake Factory in Austin on July 6.

My wife and I were celebrating our 20th anniversary when our waiter, Trey, announced that he, too, had some good news: He was getting married! I asked who the lucky girl was and he said it wasn’t a girl. 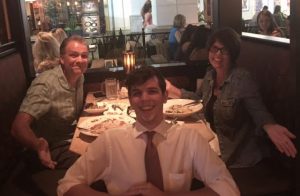 How would you respond? What would you say to him? What I said to our waiter brought down a storm of fury and fire on social media: “You are WICKED! Yahweh rebuke you! The Lord Jesus Christ rebuke you devils! You are an abomination! He hates with Holy Wrath.”

For the record, I’m a Bible-believing, evangelical Christian who believes that God has ordained marriage to be between a man and a woman only, regardless of what the current laws say.

I also understand that we are in the midst of a sea-change concerning life in America and traditional morality. We live in a post-Christian nation that is rapidly turning anti-Christian.

Yet, as a born again believer in Jesus Christ I want to be gracious, winsome and as loving as possible in order to win an audience with those who live apart from the grace of God. In other words, when a non-believer meets me, I want them to think that I am the nicest Christian they’ve ever met.

As an evangelist I am not ashamed of the gospel, because it is the power of God that brings salvation to everyone who believes, so, I have no problem explaining God’s view on sin, His Judgment and forgiveness through Jesus Christ to anyone, gay, straight or gender-confused. With this in mind, please understand why I said what I said to our waiter when he announced happily that he was tying the knot with another male: “Congratulations.”

What? No lectures about what God thinks of gay marriage? Nope. No anti-homosexual quotes from the Bible? Nahhh. In fact, I didn’t preach to him at all. I did, however, place along with my payment for the meal, two Gospel tracts that clearly outlined what God demands from each one of us: trust in the Savior and repentance. Even more importantly, I left a very generous tip!

What was my reason for congratulating him? The Bible says to “Rejoice with those who rejoice.” He was happy; I was happy he was happy. I wasn’t happy that he was lost and headed for a miserable life, both temporally and eternally. (Statistically, homosexual marriages are doomed to failure.) I wasn’t celebrating his sin. I hated that he didn’t know Jesus and that he was in violation of God’s way of doing things. I hated that!

But, he was happy. I was on my 20th anniversary. With my wife. He was working. It was not the time to judge Trey’s actions. As a matter of fact, Christians are not to judge any unbeliever’s actions.

If you want to frown, shake a finger, scold or heap condemnation on those who don’t live or believe or act like you do, that’s your choice. As long as I live in the world, I’ll try to engage people, meet them where they’re at, and hopefully win them over so that they may see Christ in me.

And on occasion, I’ll even wish them well.

(Read my follow up article after I received an incredible amount of blow back from the LGBTQ community.)