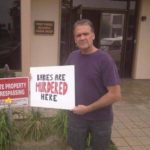 I still remember the reaction I received from the believers sitting around me: none. No one took me aside to straighten me out. Not one person wagged a finger. No disgusted looks were hurled in my direction. Grace was shown to me that day.

As a new believer I was still conditioned to the calloused thinking of the world: “Life did not begin at conception but at some arbitrary time in the future.” “It is a woman’s right to choose.” “Since it really isn’t a baby yet, it’s not murder.”

As a result of my evolutionary mindset at the time I could not discern truth from error. I was blind, cold, and heartless.

My beliefs—before Christ—contributed to at least three infant deaths during my years of indiscretion. I never had to rationalize whether my actions then were right or wrong because I never thought about it at all. It was more convenient that way.

Yes, I was shown grace that day in 1991, in the dining room at Alpine Christian Conference Center, because other believers in that room understood that new believers change slowly in God’s economy.

I once bragged to a Bible study leader how I was a dyed-in-the-wool liberal, flaunting my membership in a political party that held the very same pro-choice views I had at the time. “That will change,” he said, lovingly and calmly.

And my perspective did change; in fact, everything did. As I walked with Jesus I valued life more. I understood that humans were created in the image of God and created with purpose. Over time I became pro-life and switched to a more conservative political view.

I once was lost
but now am found
was blind
but now I see.

But it all started with repentance and trust in a Savior who rescued from Hell an accomplice to murder like me. For a heart to change from choice to life, it must start first at the Cross.

*Today marks the 47th anniversary of the Roe v Wade decision that has killed nearly 61 million human babies. What are you doing about it?