THIS AMAZING PHOTO WAS TAKEN BY A MAN WHO CALLED CHICK-FIL-A WITH THIS ORDER: “Two grilled chicken burritos with extra egg—and a boat.” 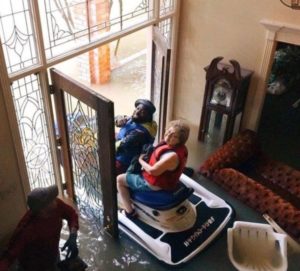 How did this come about? I was hoping to find out the back story, and I did.

In an interview with the morning show, Good Morning America, J. C. Spencer explained what happened to him and his wife during the flood and how America’s favorite chicken restaurant got involved: “Monday morning we realized we had to evacuate; we had to get out of there. And, so, I called Chick-Fil-A—now, that sounds kind of funny—but I ordered two grilled chicken burritos with extra egg—and a boat. And can you believe the manager, one of the managers of Chick-Fil-A? She sent her husband to pick us up, and we are so grateful and so thankful.

“That is incredible,” GMA host Amy Robach exclaimed, “…I know you loaded your possessions onto the boat, and there wasn’t a lot of room for you and [your wife] Karen to get in; so, all of a sudden, some Jet Skis showed up.”

In addition to their extremely polite and friendly service, apparently Chick-Fil-A is also in the rescuing business. Perhaps this is on the “Secret Menu”?

According to CNN, the Spencers usually called in a breakfast order every day to their local Houston eatery. But, Monday was a little different, hence, the request for a boat. It was a miracle that anyone answered the phone when they called because due to Harvey, the restaurant was closed, but manager Jeff Urban was busily battening down the hatches to ensure everything was okay. Though the phone was ringing off the hook, Urban had no time to answer any of the calls—until he noticed the familiar number of the Spencers on Caller ID. He figured that J. C. was just calling in his regular order not knowing they were closed. That’s when he found out their house was gone and that he needed help, not just breakfast!

“He was saying he was trying to reach out to people, and he couldn’t get any response from 911,” Urban told HLN on Thursday. “So he called Chick-fil-A to see if we could help him out. And it was such a blessing that, in that exact moment, I was there to answer the phone and get him help.”

CNN reported that “Urban got the couple’s address and called up the restaurant owner and HR director Cindy Smith to see what could be done. Smith’s husband had a boat. So he and a few neighbors headed out to the Spencers’ house with a boat and a jet ski in tow.”

On Tuesday, the couple returned to their damaged home to retrieve a wallet and a wedding ring. “I couldn’t save my house, but I have to save my marriage,” J.C. laughed.

On Wednesday, J.C. Spencer called Chick-Fil-A and ordered his same old regular breakfast, a scant two days after their unlikely rescue. And, can you believe it? All he really wanted was a breakfast burrito!