I received an email from a University of Texas student who complained about finding a Teddy Trillion Dollar Bill Gospel tract on the ground. Here’s what he wrote:

Hello! I’m a student at UT Austin, and I was walking around the library when I saw a dollar bill on the ground with Teddy Roosevelt’s face on it (obviously fake, because he’s never been on a bill). Curious, I picked up the bill and saw it was a Trillion Dollar Bill (wahoo, I’m a trillionaire!), with a statement on the back about the trillion dollar question being “Will you go to heaven when you die?”.

If I had not seen a similar thing before this would have just seemed like an odd outreach program by the church to get people’s attention, but sadly I’ve seen bills like these be put in tip jars, used as a tip for waiters, and given to homeless people in lieu of valid tender.
Seeing this, I have to ask, what is the reasoning behind using these bills? It’s definitely not going to get any converts. 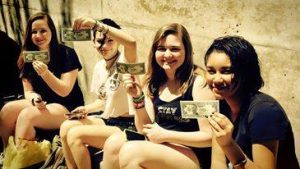 A waiter/waitress whose just spent 30 minute waiting on a table that didn’t even pay for the service definitely isn’t going to appreciate what would seem like a snide comment from a holier-than-thou person.

A homeless person who literally has to grovel at people’s feet to earn barely enough money to satiate the hunger they feel isn’t going to say “You know what? I guess I didn’t need that money, I really just need Jesus”. They’re going to be angry, upset, and scared, and even though spirituality is important, in moments of desperation and starvation, a stern lesson handed out on a fake bank note isn’t what’s going to save that person.

I apologize if this email comes off as heavy-handed or insulting, I truly don’t mean it to sound like that. But I’ve known so many people to become atheists because of these holier-than-thou preachings and how hypocritical and dishonest they seem, and it saddens me to know that even more people will probably do the same because of how dang judgy this stuff comes across.

All that to say, I really do want to know the reasoning behind this fake money stuff, whether it is just a handout that people are using in the wrong way, or if it was actually meant to be given out as fake money to people expecting real money.
– Robby

I will be answering Robby shortly, but here’s the advice I give to those who think they are glorifying the Lord by giving fake money as a tip:

A few years ago, after eating a meal in a restaurant, getting the bill and leaving a “tip,” a misguided pastor complained, “I Give God 10% Why do you get 18?” on her Applebee’s receipt after having to leave an 18% gratuity for her party of ten. A photo of the receipt went viral, the waitress who posted the receipt got fired and the pastor humbly confessed that it was a “lapse in my character and judgment.”

Please, if you are a Christian, if you are an evangelist, after dining in a restaurant, give a great tip when leaving a gospel tract, especially if the service was bad. That way, you will be a blessing and not leave a bad taste in the server’s mouth. This is what someone did after we had dinner together one night:

According to an AOL.com article

Christians are in fact more likely to tip badly than diners with no religious affiliation, according to a study on the subject by Michael Lynn of Cornell University. While Christians gave an average of 17.3 percent for good service, a significant minority — 13 percent — left less than 15 percent gratuity for good service, which is double the percentage of unaffiliated diners who tip in that range and six times the percentage of Jewish diners who do the same.

Several servers have reported receiving a $10 bill as a tip, only to find it’s phony, with the words “SOME THINGS ARE BETTER THAN MONEY” written on the back, “like your eternal salvation, that was brought and paid for by Jesus going to the cross.”

Bottom line: If you don’t like the service and you don’t want to leave a tip, please don’t let them know that you are a Christian. But if you want to reflect the glory of God, be gracious, forgiving, helpful—and leave your Gospel tract—with a big tip!!! In fact, make sure that your gratuity is at least 20% when you leave a tract—they may even look forward to you coming back!