This old photo from my “other life” circa 1980, reminds me of my “stupid 20s,” when I had no sense, lived for myself, and cared not a whit about anybody else. 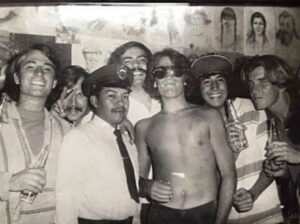 I was at Hussong’s Cantina in Ensenada, Mexico, and decided it would be a good idea to dance on top of a table.

Suddenly, two Federales grabbed my shoulders and escorted me to the shadows.

Thankfully, a Mexican local, whom I did not know, followed us into the “torture room” and negotiated my release. (I’m the smug, shirtless guy standing next to one of the arresting officiales.)

Today, December 2nd, not only marks the day that shiftless guy died in 1990, but also marks my 32nd anniversary as a Christian, a bond-slave of Jesus Christ, an unworthy servant, worm, wretch—completely dependent on my Master for life and breath and everything I have.

This picture is a great reminder of what the Lord has done in my life…and in the lives of so many others.

C. S. Lewis, author of “Mere Christianity,” and “The Chronicles of Narnia,” used to be an atheist. He said he was looking for Christ like a rat chases a cat.
The most famous of all the testimonies was the Apostle Paul’s:

“I thank Christ Jesus our Lord, who has given me strength, that he considered me faithful, appointing me to his service.
“Even though I was once a blasphemer and a persecutor and a violent man, I was shown mercy because I acted in ignorance and unbelief. The grace of our Lord was poured out on me abundantly, along with the faith and love that are in Christ Jesus.”

All were born again.

The term “Born Again” was popularized by Watergate co-conspirator Chuck Colson, who wrote a best seller of the same name about his conversion to Christianity in the ‘70’s when he was thrown in jail for his crimes. When released he started a ministry to prisoners called “Prison Fellowship.”

But the term “born again” has an earlier history. Jesus spoke it first in the best-selling book of all time, the Bible: “I tell you the truth, no one can see the kingdom of God unless he is born again.” (John 3:3)

Being born again means acknowledging that you’ve sinned against God and deserve Hell. When you repent of that sin and trust in Jesus Christ’s death on a cross, then you live for him instead of yourself, directed by his words in the Bible.

Your life will change.

In being a slave to the Savior, there is no greater freedom.

***On this day I also repented from being an antichrist. Click here to read about it.