I WAS MAD AT GOD. My daughter was sick and getting progressively worse; we were headed to the hospital and I couldn’t afford another emergency bill. And He wasn’t doing a darn thing about it. 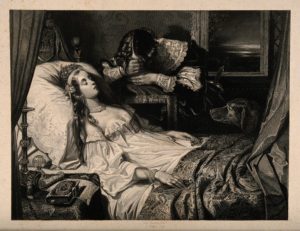 Earlier in the week my High School Senior had complained about some pain. I asked her to tell me that if it got any worse we would go to the doctor. It was Homecoming Week and with all the activities, the Community Pep Rally, the Senior Skit, the Parent’s Skit, the special dress-up days, the friends and all the hullabaloo, not to mention the Big Game on Friday, she neglected to tell me that her condition wasn’t getting any better…until Sunday, right after church. Laurel weakly whispered that she was in great pain.

I looked on the computer for an Urgent Care. All closed. Even Web MD couldn’t help.

Then I got mad at her, sensitive dad that I am. She could’ve told me on any other day of the week that she wasn’t improving. After all, doesn’t the Bible say that for six days you shall get sicketh, but on the Lord’s Day you shall not because it’s too expensivith? No, it doesn’t.

That’s why I got mad at the Almighty, too—and for good reason.

Over the last several months we have been praying as a church for a whole lot of issues, from illnesses to jobs to relational problems—and nearly all of them were answered yes! I’ve never seen such a streak in my over-twenty years of ministry. One man’s brother had his cancer go into remission after our diligent congregational prayers. A woman’s mom saw her cancer completely disappear, a direct answer to our beseeching the Lord. Still another got the dream job we all had prayed for. A man in a wheelchair has just recently been standing during our worship and praise time, something he was not able to do a few months prior, because God said “yes” to our intercessions on his behalf. Jehovah Rapha, the Lord Who Heals, wasn’t hearing my prayers; she was getting worse—and it bugged me.

We all know that God can heal, but, quite frankly, too many prayers get answered “No.” Would it ruin some great cosmic plan for him to simply touch my baby with his Rapha hand? He can do anything, anytime he wants, with or without faith, because he’s sovereign. It’s not even a matter of having enough faith. Jesus healed a paralytic who had such great faith that he had his friends lower him through an opening in the roof. Another man had weak faith, yet Jesus cast a demon out of his son after he prayed this wimpy prayer: “I do believe; help my unbelief!” He even healed people who had no faith, who just wanted their needs met. They “brought to Jesus all the sick and demon-possessed…and Jesus healed many who had various diseases…he also drove out many demons.” (Mark 1, 2, 9)

Everyone in our church was getting good, “answered yes” prayers, but nothing for the pastor? Yeah, I was bit frustrated with the King of kings and Lord of lords, the Alpha and the Omega, the Beginning and the End, the Creator of the universe.

In the Baylor, Scott & White Emergency Room I pulled the Registered Nurse aside and asked if there was any way I could save a few bucks, like not having my daughter weighed on the scale. Was there a “Discount Emergency”? A coupon, perhaps?

“Oh,” she replied, “we have a Walk-In Clinic right around the corner. It’s only been open a few weeks, that’s why it wasn’t on our website.” She then proceeded to take us over there. Real, personal, caring and attentive service. I was amazed. They only charged me a $20 co-pay.

The doctor examined my daughter. Took some tests. All negative. She wasn’t in pain anymore either. The Doc must have thought I was some type of paranoid parent with his hypochondriac child.

But I knew what had happened. Oh, me of little faith.

God, have mercy on me, a sinner.