WEARING A MULTI-COLORED AFRO WIG AND HOLDING A JOHN 3:16 SIGN, Rock’n Rollen Stewart was a constant fixture at sporting events in the late 70s and early 80s. 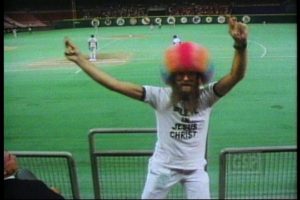 Have you ever heard of “The John 3:16 Guy” also known as “The Rainbow Man”? His goal was to be famous and he got his fifteen minutes by doing some highly unorthodox shenanigans.

Carrying a battery-powered television to keep track of network broadcasting cameras, he would time his antics perfectly and jump into the frame giving a thumb’s up and a cheesy smile. He thought he could parlay his underground celebrity status into a way to get rich, but it didn’t happen. 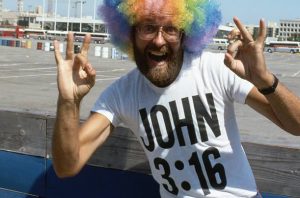 After the 1980 Super Bowl he watched a television preacher to help with his depression and gave his life to Jesus, apparently. With a renewed sense of passion, he now showed up at events with “Jesus Saves” T-shirts and held up placards with Bible verses, most notably, John 3:16—”For God so loved the world that he gave his one and only Son, that whoever believes in him shall not perish but have eternal life.” Working twelve sporting events a month, Rock’n Rollen got the Word of the Lord out in his own unique fashion.

Unfortunately, he didn’t practice what he preached. After his fourth wife left him because he choked her for holding up one of his signs in the wrong location, his car was totaled by a drunk driver. Next, he lost all his money and he ended up homeless in L.A.

His behavior then became even more erratic.

He set off stink bombs at a church and at a Christian bookstore. He threw skunk sacs into the audience of the American Music Awards with the message, “God thinks this stinks,” and was taken into custody. He sent out “End of the World” letters that included a hit list of preachers and signed his name “the Antichrist.” 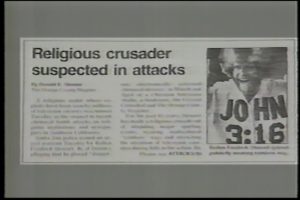 All these strange doings came to a head when the Rainbow Man was arrested after holding a maid hostage at Los Angeles International Airport. He kept the police at bay by threatening to ignite a bomb and shoot at jets ready to land on the runway.

In his hotel room they found bible messages posted to his window. When reporters asked why he had done it, the John 3:16 guy shouted, “To get the Word out.” 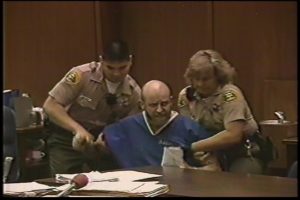 God loved. How did God love? By giving his one and only Son to die for our sins. He sacrificed his life for all those who hated him. He became nothing and humbled himself, even to the point of dying on a cross. Jesus’ whole life was lived out to draw attention, not to himself, but to his Father.

Jesus said, “…let your light shine before others, that they may see your good deeds and glorify your Father in heaven.”

The Rainbow man had it all wrong. He needed to become less and Jesus more. 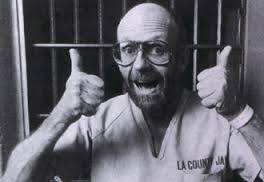 Perhaps, as he serves three consecutive life sentences for kidnapping, he’ll think about such things.

As all followers of Christ need to do, too.