UNLESS WE EXPERIENCE A MILITARY COUP, a thermo-nuclear war or Jesus returning, in all likelihood, by November 9, we will have as our President either Trump or Hillary. Both have endured gloves-off politicking, scandals and stupid things said and done, but, regardless, one of these two will hold the highest office in the land. 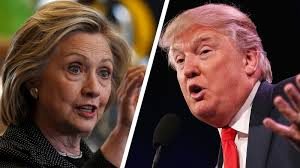 Yes, in this great nation of ours, almost anyone can make it to the top spot. The Commander-in-Chief’s shoes can be filled by nearly anybody. With enough hard work and God’s sovereignty the most unlikely of candidates can have their shot at POTUS. 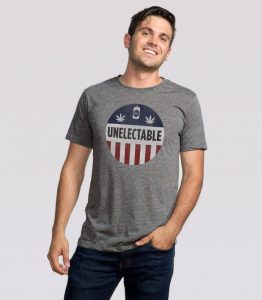 There is one candidate who is completely unelectable. Pigs will fly on the 12th of Never, when Hell freezes over in a month of Sundays before this type of person makes it as our Chief Executive. Who might this be?

So far, only one sitting congressman, Pete Stark, has ever admitted to being one, and when he did, he lost his re-election bid after serving in the U.S. House for 40 years.

Former Representative Barney Frank “came out of the closet” after retiring in 2013 and 25 years past the time he came out as the first openly gay member of Congress; but, then in his memoir he backpedaled and did not want to be identified as “one of them.”

Even Presidential hopeful Bernie Sanders was considered to be “of this persuasion” but denied it in a 2015 Rolling Stone interview when he was asked directly, “Do you believe in God?” Sanders replied, “Yeah, I do. I do.” 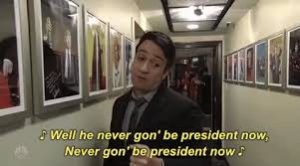 So what type of person will never hold the top spot of President of these United States? Jack Jenkins, Senior Religion Reporter for Think Progress, wrote in 2014,

“Outside of prominent roles in television or the music industry, being elected to national office is often one of the most visible steps a minority group can take to win acceptance in American society. Yet, for millions of Americans who openly identify as atheist, the goal of political representation currently remains out of reach. At present, no one in the 113th Congress identifies as an atheist.”

What about the 114th Congress? Nope. Gary Scott Smith of The Washington Post said,

“Being identified as an atheist in the United States today is still such a major political liability that a candidate holding this position probably could not gain a major party’s nomination for president or even the Senate.” According to one major poll, he noted, “Americans are less likely to vote for an atheist than any other type of candidate.”

Why do you think that people would prefer a God-fearing candidate, (or one who says they are), over one who refuses to believe?

“First, many Americans perceive atheists to be untrustworthy, insensitive and morally rootless. …a 2014 Pew poll found that Americans rate atheists more unfavorably than any religious group…most respondents, (as many as 72%), said they want the president to have strong religious beliefs…to seek God’s guidance about…major decisions….”

Conclusion: Don’t be looking for any Farmer John’s hams to be flying over the White House any time soon. 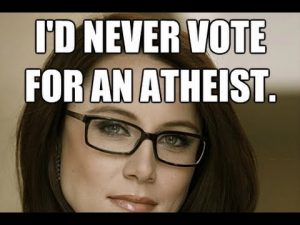 ***Source of quotes for this article: “Fat Chance (Why pigs will fly before America has an atheist president)” by Ray Comfort