“Look up here; I’m in Heaven,” sang David Bowie on his farewell video before dying of cancer.

As a pastor I’m always curious, when a celebrity dies, if he was a Christian. Will I 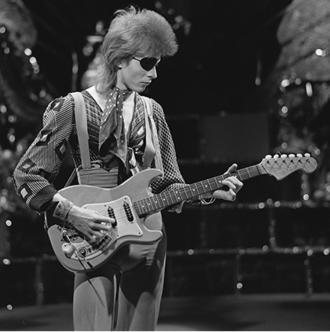 I researched his song lyrics and interviews to get some clues:

In his song “Seven” he crooned,

“The gods forgot that they made me
So I forget them, too
I dance among their shadows
I play among their graves.”

Apparently, he thought God is dead. That doesn’t seem too hopeful, because the God of the Bible says he’s the Everlasting God.

In an interview with Ellen Degeneres, Bowie said, “I was young, fancy free, and Tibetan Buddhism appealed to me at that time. I thought, ‘There’s salvation.’ It didn’t really work. Then I went through Nietzsche, Satanism, Christianity… pottery, and ended up singing. It’s been a long road.”

Jesus said that “narrow [is] the road that leads to life, and only a few find it.” And “I am the way and the truth and the life. No one comes to the Father except through me.” That’s a pretty narrow long road.

So, did Ziggy Stardust believe? In 2003 he explained, “I’m not quite an atheist and it worries me. There’s that little bit that holds on: Well, I’m almost an atheist. Give me a couple of months.”

“That little bit that holds on” may just be his conscience. We all have one and it tells us right from wrong independent of what we may think. That ally of God in the heart of a sinner always says that lying, murder, stealing and adultery is wrong.

God will not look the other way because of our sin. Sin one time and you will be found guilty on Judgment Day and end up in Hell.

But there’s good news: If Bowie put his trust in Jesus Christ, who suffered and died on a cross, was buried, and on the third day rose again, and if he turned away from his sin, God would forgive him.

Later in life Aladdin Sane seemed to soften: “That’s the shock: All clichés are true. The years really do speed by. Life really is as short as they tell you it is. And there really is a God—so do I buy that one?”

Will I see Major Tom in paradise?