I cannot prove the existence of God.

There. I said it.

But let me be clear: I can point to evidence that suggests a Creator.

With that said, I’ve given up trying to convince unbelievers that God exists for one main reason: They will never believe because they’ve made up their minds that there is no God. They cannot believe because their belief system does not allow them to.

I’ve tried observational evidence: “Look at the sky on a black, starry, Hill Country night away from the Austin light pollution. Can you really say that there is no God?”

The heavens declare the glory of God; the skies proclaim the work of his hands.

I’ve tried evidence from creation: “Did this whole universe just pop into existence by random chance over time? If I set a Coke can on the ground, will it somehow evolve into a car given enough years?”

I’ve tried The Builder Argument: “Every building has a builder, every painting has a painter; so, too, creation has a Creator!”

They’re laughing at me….

I’ve tried the classic Watchmaker Argument: “Since the complex inner workings of a watch necessitate a watchmaker, the complex design of the world we live in necessitates a Designer.”

What, then, what would be considered a good argument worthy of all these all-too-smart-atheists?

Believe it or not, no argument at all. 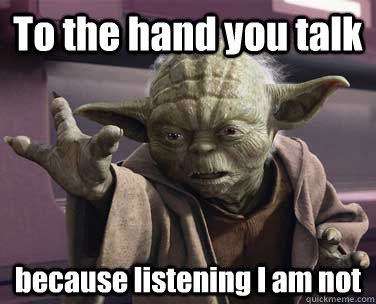 I had an epiphany, an AHA! moment. Call it a revelation, the lightbulb going off over my head thing: Why do I even need to prove God’s existence at all?

If I actually proved the existence of God, a beyond-a-shadow-of-a-doubt, conclusive, here-He-is-in-the-flesh type of proof, it would be very, very unfortunate for the unbeliever. Horrible. Awful.

Because the Bible clearly says, “And without faith it is impossible to please God, because anyone who comes to him must believe that he exists and that he rewards those who earnestly seek him.”

I would be doing my refuse-to-believe friends a great disservice—it might be a sin—if I were to prove God’s existence.

If they believed in God because of my proof, they would still be dead in their sins and disobedience—damned!—even though they believed, because their belief didn’t come by faith.

If they refuse to see the evidence, why would I want to condemn them with proof?