THE BABY JESUS WAS NOT BORN ON DECEMBER 25. 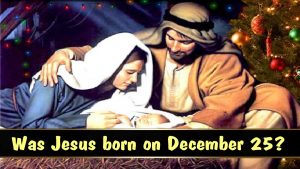 What? Are you kidding me? Nope.

The Christmas season brings with it a lot of great and wonderful traditions, but have you ever thought how these customs came about? You may be surprised! Let’s start with that Christmas date.

The early church in the first few centuries did not celebrate the birth of Jesus arguing against celebrating all birthdays of saints and martyrs. The early church fathers suggested that saints should be honored on the day they died for Jesus.

Previous dates for His birth were January, March, April, May and November. It’s not exactly clear why the church settled on December 25th, but the first recorded reference to it was in the 3rd century.

The date we now celebrate was probably to replace the pagan holiday, “The Birthday of the Unconquered Sun,” which honored the sun god on what they thought was the first day of the Winter Solstice. It’s fitting that the “Sun of Righteousness,” Jesus, “will rise with healing in his wings” on the darkest day of the year as the Light of the World.

Here are some other Christmas tradition origins: Kissing under the mistletoe may have come from a Druid tradition where enemies would meet underneath it and would stop fighting to declare a truce.

The first manger scene was a live nativity started by St. Francis of Assisi in the 13th century.

Caroling came from the 14th century where people partied during eight hour feasts celebrating with court jesters, masks and lots of singing.

Legend has it that the great Reformer Martin Luther decorated an evergreen in his house and it thus became the Christmas Tree. 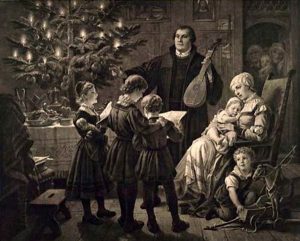 Christmas cards originated at the request of a London art shop owner and they depicted merry drinking scenes.

Holland came up with Sinterclaas, the name of the white-bearded St. Nicholas, a saint from Asia Minor, who rode around on a white horse and left gifts for good children and switches for the parents to use on bad children. 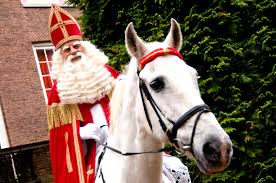 Stockings came about as a result of St. Nicholas throwing pennies down the chimney that got caught in socks that were hanging on the mantel to dry.

Now, how well do you know the real Christmas story?

Here’s a mini quiz: What did the innkeeper say when Joseph found there was no vacancy? 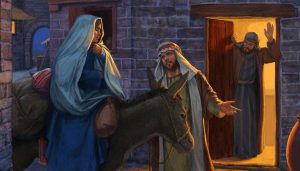 Answer: Nothing. No innkeeper is ever mentioned in Scripture.

What animals were present at Jesus’ birth?

Answer: No one knows. Animals are not mentioned.

Two more: Where was Jesus born? A manger right?

The Bible doesn’t say. It just says, “she gave birth to her firstborn son…and laid Him in a manger….” (Luke 2:7)

Lastly, When did baby Jesus cry?

A) When he opened the wise men’s gifts.
B) Whenever babies usually cried.
C) When the cattle started lowing.
D) “no crying he makes.”

Though not explicit in Scripture, we must remember that Jesus is fully God and fully man, so he cried like all babies do, especially during the pastor’s preaching.

Traditions are wonderful but it’s very important that we get the story of the birth of our Savior correct.

“The Word became flesh and made his dwelling among us.”

Yes, remember the sentimental story of the babe in the manger but don’t ever forget this truth: Jesus was born to die. For all those who would trust in the Risen Savior for forgiveness of sins they can live forever.

Corrie Ten Boom said, “If Jesus were born one thousand times in Bethlehem and not in me, then I would still be lost.”