I saw a wonderful depiction of baby Jesus by the German artist Beate Heinen years ago, and it is the best depiction of the Christmas story I’ve ever seen. The painting is called “The Manger and the Cross.” 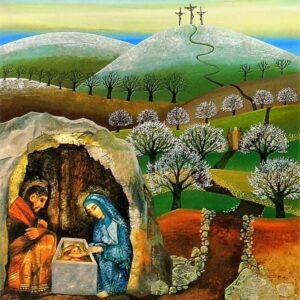 The newborn Christ-child is in a feeding trough that looks like a coffin. Outside is a path that starts with budding trees and green grass, but at the end, the trees are barren, the ground brown and dead. At the foot of three crosses, the land is gray and colorless, a place of death. It’s Golgotha, and this is the path Jesus trod, this was the purpose of his life.

The cradle must include the cross because the cross sheds light upon the cradle. It started in Bethlehem and ended in Calvary. Christmas is really the beginning of Easter. Compare and contrast these two holy days:

When the Christ child was born at Christmas, the wisemen asked, “Where is the one who has been born king of the Jews?” Now His royal title, “King of the Jews,” is affixed to the cross for all to see. In the manger, Christ was weak, frail and dependent—like any baby. On the cross, he’s weak and frail, yet resigned to do his Father’s will—as our Savior. At His birth, something strange happened in the heavens: A star in the night sky. When he was crucified, there was darkness at noon.

Among the first to come to Him at His birth were the Gentile Magi, drawn by the light of the star. The first to respond to the cross was the Gentile centurion, awakened by the shaking of the earth. From the cradle, Jesus was taken away to Egypt, but then returns. In the crucifixion, Jesus dies, seemingly taken from this earth, but is brought back to life, through the resurrection.

If you look beyond those three crosses in Beate Heinen’s painting, you’ll notice the blue sky, the hope of a new day. There are even golden hues just behind it. If one would walk a little farther down the path that connected the Manger and the Cross, it would be a path of gold leading to “a new heaven and a new earth,” for the first heaven and the first earth had passed away….

We would then see the Holy City, the new Jerusalem, coming down out of heaven from God, prepared as a bride beautifully dressed for her husband.

And we would hear a loud voice from the throne saying, “Look! God’s dwelling place is now among the people, and he will dwell with them. They will be his people, and God himself will be with them and be their God. He will wipe every tear from their eyes. There will be no more death or mourning or crying or pain, for the old order of things has passed away.” (Revelation 21: 1-5)