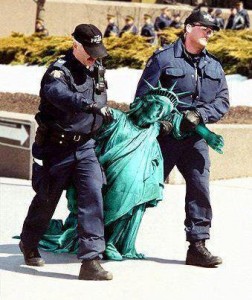 A Wisconsin man who wants to hand out Bibles at the 40th Annual Twin Cities Pride festival in Loring Park this month will have to confine himself to a booth just outside of the event.

Chief U.S. District Judge Michael Davis issued a 41-page order Monday denying Brian Johnson’s request for an injunction that would force the Minneapolis Park and Recreation Board to allow him unfettered access to the festival grounds, reasoning that his constitutional challenge was unlikely to succeed. Read the rest by clicking here.

But wait! I just found this good news! Click here to read it.

The criminal charge that was filed against a missionary who told police officers to repent on Independence Day has been dismissed.

Jesse Boyd of Full Proof Gospel Ministries had attended a fireworks display in a public park in Holly Ridge, North Carolina on the Fourth of July with fellow missionary Ricky Springer at the invitation of a local Christian. The two began distributing tracts to attendees, and then before the fireworks display began, Springer decided to preach in the open air. Read the rest here.

A Phoenix man who held weekly Bible studies at his home has had the book thrown at him over the religious gatherings. Michael Salman (pictured above) has been sentenced to two months in jail and more than $12,000 in fines because the group sessions at his home were against the city’s building code.

“They’re cracking down on religious activities and religious use,” Salman told Fox News Radio. “They’re attacking what I as a Christian do in the privacy of my home.” Read the rest here.